A Closer Look at this Previously Featured Amish Recipe

Dissolve yeast in lukewarm water.  Soak for five minutes.  Combine lukewarm milk, 1/4 cup sugar and salt.  Add 1 cup flour, shortening and beaten egg.  Continue to add flour until you get a soft dough.  Let rise for one hour.  Punch down and let rise again.  Mix 1/2 cup sugar and cinnamon.  roll dough into rectangle about 1/2 inch thick.  Sprinkle with sugar and cinnamon mixture and roll like a jelly roll.  Let rise again and bake at 350o for about 30 minutes. 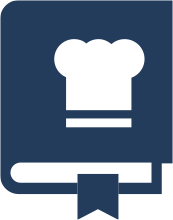 Back to Current Recipes

The Amish Way cookbook, compiled by Adrienne Lund, published by Jupiter Press, copyright revised edition 1994. Adrienne Lund is the author-publisher of nine Amish cookbooks and a children's book about the Amish way of life. Her books are available in our gift shop and in our online store. Visit her website at amishwaycookbooks.com. Used by permission.

If you enjoy this recipe, or if there is a certain Amish recipe you would like to see on this page, visit our Facebook page and let us know.